My YouTube feed just showed me the Josh Groban/Helene Fischer cover of "I'll Stand by You," a song that's inextricably tied to Snupin fandom for me (though, given how into hurt/comfort I was before I ever knew of fandom, yes, it pretty much belongs on any soundtrack . . .). I like Josh, but it isn't doing it for me -- like the Génération Goldman cover of "Là-Bas," it has a produced gloss that doesn't serve the song. This is more my speed:

Earlier today, I managed to talk myself out of splurging on a raised bed kit. (25% off is still 75% too much for my current bandwidth. I still have straw from three or four years ago to spread . . .) Today's docket includes writing a number of thank-you and get-well and GOTV cards, working on a catalogue about medieval Italian manuscripts, and drafting my last public Tupelo poem (my sponsors will be getting two more via email). I've been using holidays to keep the well primed, so tomorrow's poem could involve tooth fairies and small change, though right now I'm thinking more about scouse and soufflés. This entry was originally posted at https://bronze-ribbons.dreamwidth.org/420926.html. I see comments at DW, IJ, and LJ (when notifications are working, anyway), but not on feeds.

This sample showed up in today's deliveriites: 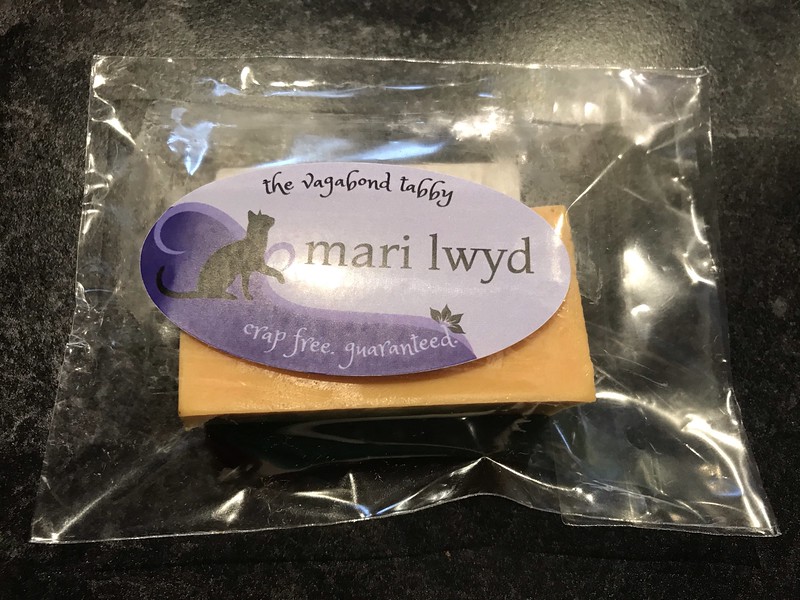 (I'd ordered some gifts from her this year, including several bags of Wicked Girls Saving Ourselves salts.)

In a somewhat related observation, it's been lovely to see recent kudos for drabbles and fics I wrote years ago, across fandoms -- TDIR, HP, FAKE, Wimsey, and Laurens-Hamilton (posted, we'll note, years before Hamilton hit Broadway, because I became obsessed with John Laurens back when Batman portrayed him in a miniseries about George Washington) among them. Some things have held up reasonably well (it was nice to revisit my own memories of London while rereading Other Work for Us To Do [TDIR, Will/Bran]); others now carry the sting of disappointment (in JKR, in Rahm, in men's tennis . . .). I still have all the reference notes and books I collected in the course of starting "Not as Dumb," but knowing what we do now about police corruption and brutality, I don't think I'll ever regain the need-to-write that had me attempting to tell that story in the first place.

Which of course means disappointing other people in turn. Not that the stakes are anywhere near alike, but the passage in Bujold's Civil Campaign where two characters talk about broken vows and surviving -- yeah, that resonates a lot. It's something I circle around in my poetry sometimes. (And if you're wondering what's new in that realm, Autumn Sky has published some pieces recently.)

On a domestic note:

The BYM: *gives me a look*
Me: What?
BYM: I don't know. You look like you're wondering about whether you're going to have to kick someone's ass.
Me: Hmm. That's my default state, isn't it.
BYM: "Resting Worried-You're-Going-To-Have-To-Kick-Someone's-Ass Face?"
Me: Ayup.
BYM: Hmm.
Me: *starts transcribing conversation*
BYM: *tries to peer over top of my laptop screen from other side of kitchen counter*
BYM: *ambles over to my side and grins into my shoulder when he sees that I am indeed reporting this* This entry was originally posted at https://bronze-ribbons.dreamwidth.org/420786.html. I see comments at DW, IJ, and LJ (when notifications are working, anyway), but not on feeds.


Over the years, Snape had applied layer upon layer of ink to his arm. To the untrained eye, it would have looked like a solid black sleeve, but only Lupin ever saw Snape shirtless, and Lupin could read between the lines.

Lupin knew about different kinds of silence, too. He rarely disturbed any of them, but sometimes his fingertips lingered over certain words, as if he wanted to lift up and rearrange them.

“Do you hate it?” Snape suddenly muttered one night.

“No,” Lupin replied. “It stores the unsayable.” His hand closed around Snape’s wrist. “It helps keep you here.” This entry was originally posted at https://bronze-ribbons.dreamwidth.org/420560.html. I see comments at DW, IJ, and LJ (when notifications are working, anyway), but not on feeds.

I've survived many days far worse than today, but still, the combination of broken fridge, dying aunt, and herd of ten-headed cows currently on my docket has me gritting my teeth.

But today is done, and I am unwinding with clips from the Graham Norton Show. This one just delights me, especially when Michael Sheen bellows "Yes, of course!" at David Tennant at 1:28:

Speaking of eggplants, I brought one home Saturday night that had the BYM doing multiple takes, the furrows in his forehead deepening each time he set eyes on the specimen: 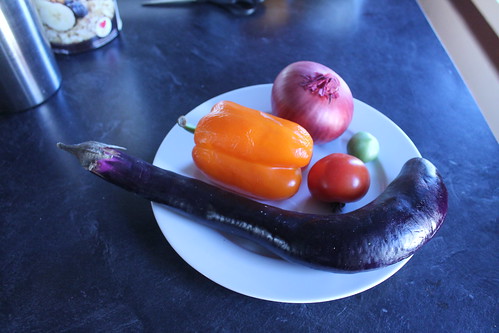 This entry was originally posted at https://bronze-ribbons.dreamwidth.org/420151.html. I see comments at DW, IJ, and LJ (when notifications are working, anyway), but not on feeds.

“What’s your name?” he asked, crouching to get on eye-level with the little girl who had been patiently waiting behind several taller, pushier people.

“Ruth,” she said shyly, offering him her autograph book.

And, via my gal Rooo, Questlove: "One weekend to mope & that's it!"
https://youtu.be/BZpUUXhWf8w

WORD. This entry was originally posted at https://bronze-ribbons.dreamwidth.org/419987.html. I see comments at DW, IJ, and LJ (when notifications are working, anyway), but not on feeds.

Over the next month or so, I will be recording scenes from Superstition_hockey's Bells/Hayes arc and posting them at https://archiveofourown.org/works/23500855/chapters/56354350, including comment-fics from HawkeyeState that deserves a wider audience.

I'm not doing them in order (uninhibited as I am, trying to record other people's sex scenes with the BYM within earshot does cramp my style), and it would behoove you to become familiar with the series beforehand in any case. Start with archiveofourown.org/works/6099484/chapters/13981810

And if hockey/surfing/feminist-bro slash fic is just never gonna be your thing, it's perhaps worth noting that I fell into that fandom via

lomedet, whose tweet tonight also clued me into #SaturdayNightSeder, which delighted me on many levels, including these:

Highlights for me included:

* (as described by Lion Saltzman): "Ben Platt singing Somewhere Over the Rainbow as Judith Light talking about Jews escaping to America and the song being composed by Jewish refugees, and about the Wizard of Oz coming out less than two months after Kristallnacht."
* Henry Winkler talking about Moses interspersed with Billy Porter singing "Go Down Moses"
* Debra Messing and Richard Kind telling the Passover story. Funny-schticky in parts 1 and 2, and then genuinely moving in Part 3 -- the parting of the Red Sea has never seemed so real to me
* Harvey Fierstein riffing on "Next year in Jerusalem" and asking why we couldn't have taken over Berlin instead.

This entry was originally posted at https://bronze-ribbons.dreamwidth.org/419833.html. I see comments at DW, IJ, and LJ (when notifications are working, anyway), but not on feeds.

Checked my filters after seeing the top 3 tags on your A03 account summarises your brand meme at Sam's. "Crossover Hurt/Comfort Futurefic" does seem on target.

Plans for the weekend include recording audiofic, participating in some dance sessions (via Ailey and CalTwerk -- took Zumba, DanzaTone, Vogueing, and Horton classes this week), and tending to plants. But first I am going to close the laptop until at least sunrise. I am glad to be employed and loved, but I am also whupped (cue second bunny eyes at yet another meeting request), and it's time to catch my breath.

This entry was originally posted at https://bronze-ribbons.dreamwidth.org/419496.html. I see comments at DW, IJ, and LJ (when notifications are working, anyway), but not on feeds.

Because my ability to resist pretty souvenir badges is laughably low, I now have a stinging scratch on my chinny-chin-chin. But I also glimpsed a photo shoot (I'm guessing of an engagement) and an abandoned Christmas tree while in Shelby Park, so yay for whatever it takes to get me outside... 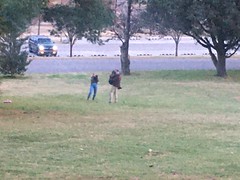 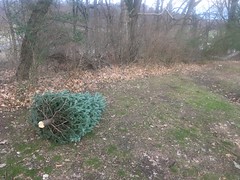 This entry was originally posted at https://bronze-ribbons.dreamwidth.org/419300.html. I see comments at DW, IJ, and LJ (when notifications are working, anyway), but not on feeds.

In other fandom news, I wrote comment-fic in response to reactions to one of Superstition_Hockey's Kinktober vignettes, and ended up batching it as A-game over on A03. (Not gonna lie, I'm inordinately pleased with the line "like retelling a Russian novel with pivot tables" to describe tax prep for a complex family.)

I still harbor hopes of coaxing two old projects across the finish line within the next decade, but of course the Workflowy lengthens exponentially by year, even as I nest more and more things under "next year," "beyond next year," "after we save the republic," "probably not in this lifetime but I can't bear to delete these notes just yet," etc. And at the moment most of my days currently take this shape:

There is so much more on the list, of course, and people to whom I want to take moon cakes and meet up with for happy hour and dance "Zither Belles" with and spend companionable hours weeding/snipping/paddling/folding/etceteraing are not getting any younger or less busy themselves. It is, I recognize, a grand problem to have, and that my horribly lonely childhood so-sorry-for-my-self would be utterly thrilled to be so occupied. There will always be yearning, even when the right choices are made. I get that now.

This entry was originally posted at https://bronze-ribbons.dreamwidth.org/418751.html. I see comments at DW, IJ, and LJ (when notifications are working, anyway), but not on feeds.

(I mean, it's been like a decade since I last posted fic, but this sort of thing is what this journal was started for...)

This entry was originally posted at https://bronze-ribbons.dreamwidth.org/418545.html. I see comments at DW, IJ, and LJ (when notifications are working, anyway), but not on feeds.
Collapse